By shear coincidence this evening, I discovered that Real Rhapsody is using SQLite for it’s local cache. After some brief inspection, it looks like this db is used to store playlists, user credentials, radio stations, and info about music that was imported from local disk. I thought this was pretty cool since I’m a big SQLite fan and it’s good to see its use in such a widely used application.
For whatever reason, Rhapsody was taking much longer than usual to load. I decided to load up File Monitor from www.sysinternals.com to see if anything interesting came up. As it turns out, I noticed quite a few READ attempts for “C:\Documents and Settings\username\Application Data\Real\Rhapsody\local.seb”. This peeked my curiousity, so I loaded up my hex editor and found that the file header contained:
** This file contains an SQLite 2.1 database **
I’ve done a bit of SQLite development in the past, so I happened to have the CLI, ODBC driver, and graphical browser already installed. I loaded up Visio to create a database diagram, but the SQLite ODBC driver had problems. So I quickly exported this to an Access database so I could see the table layout. 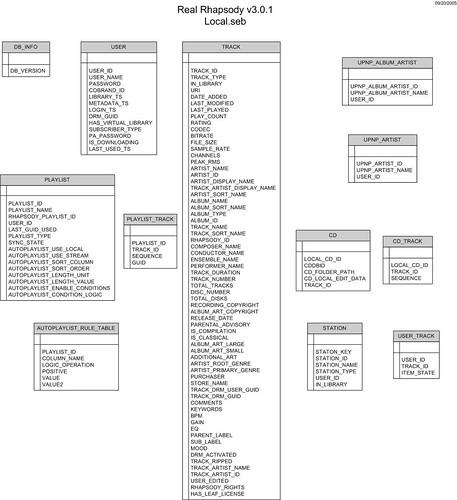